In general, we recommend the 3rdparty idiom for organizing dependencies on code from outside the source tree. This document describes how to make this work for JVM (Java or Scala) code.

Your JVM code can depend on external, third-party libraries. Pants uses Ivy to resolve and retrieve these JAR files. You should know the (Maven/Ivy groupId, artifactId, and version) you want to use.

If you have a small to medium number of third-party dependencies, you can define them all in a single 3rdparty/jvm/BUILD file. If you have a large number, it may make sense to organize them in multiple subdirectories, say by category or by publisher.

In the appropriate BUILD file, you create a jar_library referencing the jars you want:

Here, the jar_library's name defines a target address that other build targets can refer to. The jars refer to jars that Ivy can resolve and fetch.

When using Scala with pants, the scala_jar symbol will add the appropriate Scala version suffix (e.g. _2.12) to the name field automatically.

To set up your code to import the external jar, you add a dependency to the appropriate Java target[s] in your BUILD file and add import statements in your Java code.

It is possible for your code to exist as source in the repo but also be published as a binary to an external repository. If you happen to pull in any third party artifacts, they may express a dependency on the published version of the artifact. This means that the classpath will contain both the version in the repo compiled from source and an older version that was previously published. In this case, you want to be sure that when pants always prefers the version built from source.

Fortunately, the remedy for this is simple. If you add a provides= parameter that matches the one used to publish the artifact, pants will always prefer the local target definition to the published jar if it is in the context:

If you notice that one "foreign" dependency pulls in mostly wrong things, tell Pants not to pull in its dependencies. In your 3rdparty/.../BUILD file, use jar's intransitive argument; then carefully add hand-picked versions: 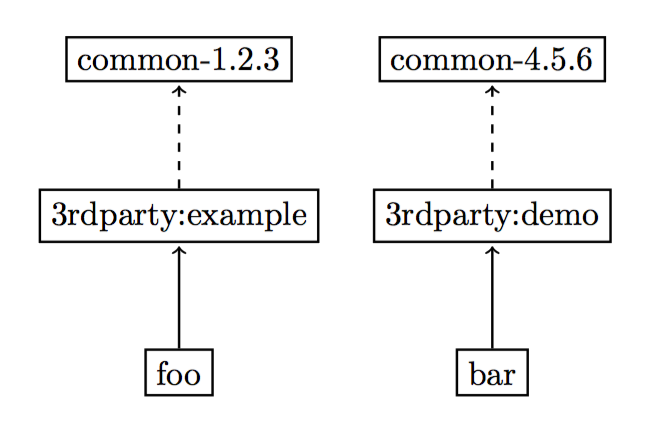 Assume foo and bar are binary targets. If you build a binary of foo with ./pants binary foo, foo will be packaged with the example jar in addition to its transitive dependencies, which will be resolved as the common jar, version 1.2.3.

Likewise, if you run ./pants binary bar, it will be packaged with demo, and the transitive dependencies of demo, which here is simply the common jar version 4.5.6.

However, if you run ./pants binary foo bar, ivy will only resolve one version of common-1.2.3, which most likely means that both foo and bar will get common version 4.5.6 (because it is the more recent version). This is a problem, because it may be that common-4.5.6 is not compatible with 3rdparty:example, which will break the foo binary at runtime.

More subtly, if you have many intermediate java_library targets between your jvm_binaries and your jar_library targets (which is normally the case), simply changing which combination of java_library targets are in the same ./pants invocation may invalidate the cache and force Pants to recompile them, even if their sources are unchanged. This is because they may resolve different versions of their transitive jar dependencies than the previous time they were compiled, which means their classpaths will be different. Getting a different classpath causes a cache-miss, forcing a recompile. In general recompiling when the classpath changes is the correct thing to do, however this means that unstable transitive dependencies will cause a lot of cache-thrashing. If you have a large repository with a large amount of code, recompiles get expensive.

There are a few ways to avoid or work around these problems. A simple method is to use the strict ivy conflict manager, which will cause the jar resolution to fail with an error if it detects two artifacts with conflicting versions. This has the advantage of forcing a dev to be aware of (and make a decision about) conflicting versions.

You could also disable transitive jar resolution altogether, and explicitly declare every dependency you need. This ensures that you have total control over your external dependencies, but can be difficult to maintain.

The third option is using managed_jar_dependencies, to pin the versions of the subset of your transitive dependencies that you care about.

Maven handles this problem with the <dependencyManagement> stanza, and Pants has similar functionality via the managed_jar_dependencies target.

You can set up your 3rdparty/BUILD file like so:

This is a bit verbose, and entails a bit of duplicate code (you have to mention jersey-core 3 times in the above example). You can use the managed_jar_libraries target factory instead to make your 3rdparty/BUILD definitions more concise.

This example is equivalent to the one earlier, but using managed_jar_libraries instead:

This automatically generates jar_library targets for you, and makes a managed_jar_dependencies target to reference them. (Note that you still need to make the same change to pants.ini).

The generated library targets follow the naming convention org.name.classifier.ext, where classifier and ext are omitted if they are the default values.

Sometimes your code depends on a buggy external JVM dependency. You think you've fixed the external code, but want to test locally before uploading it to make sure. To do this, in the jar dependency for the artifact, specify the url attribute to point to the local file and change the rev. If you are actively making changes to the dependency, you can also use the mutable jar attribute to re-import the file each time pants is run (otherwise, pants will cache it):

Strict_deps is a feature of JVM targets which controls the dependencies available on the compile classpath when that target is being compiled.

When compiling a JVM target with strict_deps disabled, all transitive dependencies of that target are included on the compile classpath.

Enabling strict_deps speeds up builds because it 1) reduces the work the compiler has to do when searching for symbols, and 2) improves cache hit rates by reducing the number of dependencies that contribute to a target's cache keys. This works because most targets don't need their full transitive dependencies available to compile. However, it does require you to be more exact in writing down your dependencies.

Depending on the shape of your build graph, use of strict_deps improves cache hit rates and per-target compilation time (on the order of 10-20%).

With strict_deps enabled, we can identified some gaps between what the compiler expects on a classpath and what is actually available on the classpath as specified in BUILD files.

Let's look at a simple example involving 3 targets A, B and C. B depends on A, and C depends on B. Thus their dependency graph can be represented like this: C->B->A. Their declarations in BUILD file are shown as below:

People may wonder why the compiler asks for A to compile C in the first place. There are a number of reasons for this, an example of which is that the java compiler needs all transitively implemented interfaces to be on the classpath so that it can resolve default method implementations.

The compile overhead of a library change for downstream targets when strict_deps is enabled should be minimized to just the targets that depend directly on the library target or depend on a target that exports that target.

This is a change from the current behavior where all downstream targets will have their compile invalidated.

With strict_deps, a change to a library target will only invalidate the compile artifacts of dependent targets if they have

The errors sometimes have different messages, but usually in Scala they look something like this:

NOTE: It's likely the source snippet may not be related to the error

There are two possible solutions for this error. One is to identify the dependency that is missing and add it to your target directly.

Missing-deps-suggest is a feature that will try to identify the target that failed to compile and suggest a dependency that may be missing.

If this doesn't provide a solution, then the second solution to this error is exporting the missing type's target in the dependency you depend on.

A target should export any dependencies which provide types or symbols that are exposed in its public API. For instance, if target A has a method returning something of type X, it should export the target which defines the type X.

Exports are transitive. This means that if a target exports one of its dependencies and that exported dependency has exports, those exports will also be end up on the classpath. This allows the export graph to model requirements created by type hierarchies.

How to Solve An Error With Exports

Let's look at an example failure:

There are three targets that need to be identified to fix an error like this:

Target 1 should be the most straight-forward to find. It's the target named in the failure message as a failed job. It's mentioned both at the end of the failing compile, in the line starting with FAILURE: Compilation failure, and in a line near the error message. In this example, the failure is compile(examples/src/scala/org/pantsbuild/example/strictdeps:h). So, target 1 is examples/src/scala/org/pantsbuild/example/strictdeps:h.

Finding target 2 involves looking at target 1's dependencies and figuring out which one contains the type from the error message. First, let's find the type. In a message like this, target 2's type is the one that required the missing type. In this message specifically, it's the following line:

The type from target 2 is the method yyy on z.X. How to we find the target for that type? One way would be to eyeball it. Let's look at the BUILD file.

In this example, target 1 only has one dependency, x. That makes finding target 2 easy. It's :x.

Now that we know target 1 and target 2, let's find 3. Since we're doing this manually, we'll look at the build files again.

It too has only one dependency, so we know what Target 3 is. It's :z.

Now that we know what the missing dependency is, we can fix the error. Z has to be on the classpath in order to use X, so any target depending on :x will also need :z. We could just add a dependency on :z to :h, but doing so would result in new users of :x running into this same error. To prevent that, let's add an export to :x of :z.